A penny for artificial intelligence, two pennies for human awareness and spirit! Otherwise, no sustainability. 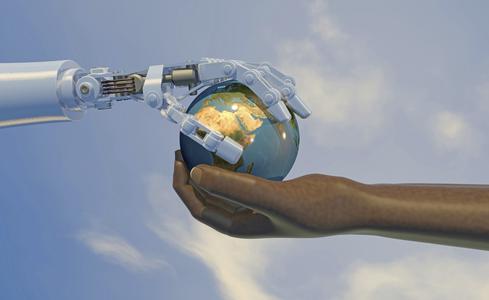 S vs. A ergo O! (Sustainability vs. Awareness ergo Oxygen!)

Who knows how crazy our deep belief in democracy and human rights will seem to generations a hundred years from now, just as we now find silly some ancient tales of going to war and heroisms in exchange for acceptance to heaven. Really – people were surging into crusades from 11th to 13th century motivated, among other things, by the pope's act of forgiveness of all sins and a guaranteed place in heaven. Pure fiction – with enormous strength and consequences!

Will somebody make fun of terms such as sustainability, humanity, equality, responsible living that a lot of us believe can and should exist? Or will we enter history as mentally anesthetized beings that so senselessly believed in some unreal hope of unity and goodness? A fiction? Can anything other than growth, interest, money, egoism, numbers and machines win over democracy and human rights in this world (Trumps', Bezos' or Musk's world)?

Will our descendants at the end of this century have the chance to ever see wild animals in nature – lions, elephants, giraffes, chimpanzees, bears – or will they only know them from photos, just like we know from photos lost parts of Amazonian forest or Arctic ice? Will they still be able to hug trees, walk through woods, listen to the hum of rivers, or will those things seem unknown and foreign to them?

How will they even refer to us, these potential future Homo deus, human gods with integrated chips and algorithms for everything and beyond? Will we be remembered as Homo Sapiens, people with awareness? Or will we be remembered as Homo Hypocrita, hypocritical people that talked about one thing but did the opposite and just took it all in stride, for the so-called peace of mind, comfort, or just enormous opportunism? The second outcome seems entirely plausible. We swear by value, quality, virtue, morals, but at the same time we break them, ignore them. We pride ourselves on being great fighters in keeping our eco system, climate, forests, rivers and seas healthy, but as soon as we hear the rustle of money, we give up our fight. The closer to power and government, the more obvious this becomes.

Even though we excel daily in commenting everything and everyone, we have a hard time admitting that we have no courage or capacity to do something because we are just an average dragging ourselves through life. We relentlessly demand our rights, at the same time ignoring any kind of personal responsibility for the state of the world and the future.

We brag about our children being important and loving them, but we don't teach them any real values or life virtues. Instead we teach them only price matters by buying them with materialistic bribes, hiding our unhappiness, confusion, insecurity, buying our „peace“ and only showing them the power of money.

We talk about being exhausted, working too much, waiting for vacations and family time, but when a pandemic allowed us to slow down, we realized we didn't want this. We are loudly sick of isolation and things that we give up, the vast peace, boredom. We organize silly protests „WE WANT FREEDOM – DOWN WITH MASKS!“. We amplify domestic violence, we drink too much, go crazy…

Ingrateful for what we have, never satisfied. Always searching for something bigger, more, more, more…because the yearning for more is stronger than satisfaction. We flaunt a bunch of mysterious words to feel important – globalisation, global ecology, artificial intelligence, reenginerring, liberal market – but we don't remotely try to actually understand them, solve them, get to the core of what's important and understand the difference between these things being useful to humanity and being threatening for us and our planet.

A man that is not awakened is the best material for bigger, stronger, more powerful manipulations, fake stories, ever growing fiction that in this world are mostly aimed at immediate needs of economic and political systems, but not towards the needs of people as aware beings. The needs of powerful systems that treat us as their „product“, play with our focus, shift it with little effort, abandoning the matters important to our well-being (health, peace, nature, air…) and place the spotlight on the irrelevant (commercial, self-promotion, shopping, spending, abundance, sensation…). You don't believe it?

Well, don't we go through years and years of education and living without anyone teaching us how to love ourselves and why that is important? Not to inflate our ego, but to become aware, confident, less susceptible, unmanipulated, for the betterment of the world (because when you're good with yourself, you are not mean, angry), for thankfulness, for the reminder that we don't have to do what everyone else does, for the fact that this would make it so much harder for the world's economic systems, social networks and politics to push us over the edge.

Who knows if we will ever be able to understand how right and how neccessary it would be to match each penny and each second invested in development of artifical intelligence and technology and invest it equally in the development of human awareness and conscience?

Let's not stop half-way in the transformation from homo sapiens, animalistic in the past, to homo sapiens liberated and free, the most transcendent being, and so avoiding the worst of scenarios – first the reduction and then the final disappearance of a human civilization (homo sapiens) and on its' remains the rise of the new, different kind of „machine civilization“. You have heard the saying: „In the factory of the future there will be one machine and one man. The machine will be the boss.“

Our great scientist and world-renowned intelectual and space explorer from Višnjan, Korado Korlević, has already announced in his Večernji list interview from 2020 the absolute domination of machine civilization is a very likely outcome at the end of the century.

So what the people of today are doing is only benefitting its' unsustainability. Sustainable development is just another impossibility and hypocrisy of those relentlessly using Earth's resources and people. Sustainable development – better something than nothing! But the way out is in reduced spending and buying of things we use and don't use, but nevertheless have, the overflowing wardrobes, devices, objects, cars, buildings – owned but never used. The way out is killing the „growth“ and „GDP“ criteria as the indicator of society's success, something the science and profession are long advocating for, however unsuccessfully (outnumbered still). Doesn't greater spending and production, higher GDP, mean more waste, destroyed forests, filthy waters? So the right direction is not GROWTH, it is DEGROWTH (there is a great book „Degrowth – A Vocabulary For a New Era" from 2017). The way out is sensible production and fair distribution of world natural wealth between continents, countries, peoples, citizens!

We need to stop and redirect our goals toward only one – the well-being of people!

I wouldn't give this world up for anything, no matter how angry it can make me.

Who knows if in a hundred years human awareness will be merely a myth to our descendants or a story that actually happened?