Crocon at „Women in Port of Diversity 2020“ conference 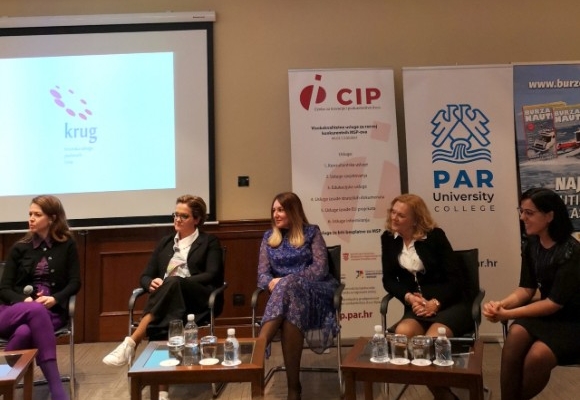 On March 09, 2020, the 3rd annual business conference „Women in Port of Diversity“ was held in hotel Bonavia, organized by Business Women Association Krug – Rijeka Chapter and the Croatian Chamber of Commerce.

They spoke about the position and treatment of women from their perspective, and even though the conclusion to be drawn from their experiences and the statistics was that women still have a long way to go before reaching equality, we most related to Mrs. Ahmetović's opinion that, even though at present very much needed and well received, it is regrettable that such discussions still have to be held and gener equality has to be talked about, instead of simply lived.

The second panel „Women and the Sea“ had five women, mostly entrepreneurs, whose life and business paths have in some way been tied to the sea – Crocon director Linda Poščić Borovac, owner of Lantina and publisher of the well known nautical magazine „Burza nautike“ Jelena Cvitanić-Herak, owner of 2. mjesto agency and organizer of Fiumanka, the international sailing race, Liljana Ivetac, director of District Port Authority Dijana Mihaljević and the director of Metal Shark Croatia Teuta Duletić.

When asked by the panel moderator, PAR University dean Gordana Nikolić, what her opinion is on the situation and male-female business relationships today when compared to when she first started her career, Linda replied that years and experience in her case proved that nobody, whether in business or life in general, will treat you in any way you don't allow yourself to be treated. Some of her initially more challenging relationships, especially with older male business partners, are the ones that over time turned into long lasting, genuine friendships full of mutual respect based on hard work and commitment on both sides.

„The thing I still look forward to in business is finding good people because in my opinion only good people with good human values can be good professionals. Whether somebody is a professional and a complete package person who takes on responsibility, who is commited and dedicated to the work, who gives the best on the first try, not the six hundred and first, who listens actively and speaks clearly and so creates trust in a good communication, all of this is more important than them being a man or a woman.“

As a message to the audience and all the young women who are only just starting on their business path, Linda emphasized the importance of not letting yourself be seduced by superficial and irrelevant things that stifle the human spirit and separate us from the best in ourselves. „The greatest compliment I can receive is someone telling me I am a good person“, she added, „because this is very rare today. In business and in life you will more often come across toxic people and negative situations than a noble person full of zest and the „I care“ gene.“

Additionally to these values, as one of the most important ones Linda ephasized integrity. „I don't trust people who grow their companies and don't pay their bills or their employees, nor do I trust people who give advice about happiness but don't know how to live it. Having seen too many people burdened by ego, positions, titles in our daily business, in our company we were inspired and found another way of sending out our message that the important thing is to be a leader regardless of your title. So we made business cards for each member of our team carrying a message Yesterday was the deadline for bad business values. With this we're saying we've had enough of irresponsibility, laziness and justifications. On my card there is no CEO, only Champion of Integrity, and those who know me know that this is truly me.“

Concluding the panel Linda was asked to share her original poem „More, pul tebe“ (Sea, At Your Side) which she felt conveyed her feelings for the sea as loneliness, isolation to draw your best ideas from, as well as sea as excitement, waves, thunder, courage.

The final panel RADiONA was named after the graduate paper written by the panelists, four young women who did their research and filmed a documentary on the complex theme that is the woman-work relationship in our society in collaboration with several women of different profiles and work experiences. They left us with the hope and trust in the generations to come that they will use their defiance and strength to demand and realize everything they want.